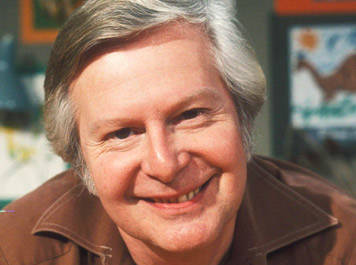 “For nearly 40 years, week in and week out, millions of children across the country would rush home from school to lie sprawled on sofas and living room floors, hoping against hope that their latest masterpiece in corrugated card, crayon, straws, wax and, more often than not, pasta, had made it into Tony Hart’s “Gallery”.

Only about 25 of those survived the culling process, which, according to a biography of Hart written by his daughter, Carolyn, began with a small workforce of retirees scrutinising and discarding the majority, and ended with Hart trying to even the playing field by ensuring every age, from four to 14, was represented.

It was Hart who encouraged the homespun nature of his half-pint fans’ endeavours, demonstrating that art could be made from anything. He once used roller towels to create an 80ft tractor on a hillside in Sussex, and a rake weighted with a stone to etch a snake on a Pembrokeshire beach. Stunts aside, he was a brilliant draughtsman, too, able to conjure anything with a few strokes of his pen.”